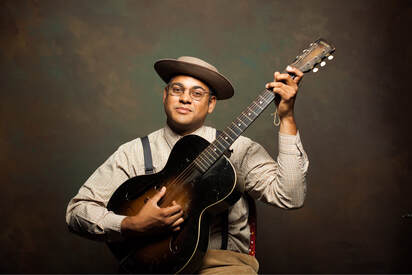 GRAMMY Award Winner, Two-Time EMMY Nominee, 2019 WAMMIE Award Winner- Dom Flemons is originally from Phoenix, Arizona and currently lives in the Washington, D.C. area. He is known as “The American Songster” since his repertoire of music covers over 100 years of American folklore, ballads, and tunes. Flemons is a music scholar, historian, record collector and a multi-instrumentalist. He is considered an expert player on the Banjo, Fife, Guitar, Harmonica, Jug, Percussion, Quills, and Rhythm Bones.

The “Black Cowboys” album has won a Living Blues Magazine Award/ Critics Poll for “Best Traditional & Acoustic Blues Album”. It peaked at #4 on the BILLBOARD Bluegrass Charts and Flemons has been nominated for “2018 Artist of The Year” at the International Folk Music Awards, “Best Acoustic Album” at the 2019 Blues Music Awards, “Best Folk Album” at the 2019 Liberia Awards, and has won a 2019 Wammie Awards for “Best Folk Album”. He was chosen to be a "Spotlight Artist" at the "Soundtrack of America" event curated by the World Renowned Quincy Jones, EMMY Award Winning Director Steve McQueen and their team.

In 2018, Flemons had his major solo debut on the Grand Ole Opry, on a night with Carrie Underwood and Old Crow Medicine Show, and has been included in the 2018 class of American Currents at the Country Music Hall of Fame Exhibit alongside Reba McEntire, Jeannie Seely, Chris Stapleton, Molly Tuttle, Carrie Underwood, Keith Urban, Kane Brown, Dan Auerbach, Dan + Shay, John Prine and more.

Flemons was nominated for TWO EMMY's at the 2018 National Academy of Television Arts & Sciences Mid-America Awards for PBS Episode: Songcraft Presents Dom Flemons and for the co-written song “Good Old Days” with Songwriter Ben Arthur. He was the first Artist-in-Residence at the “Making American Music Internship Program” at the Smithsonian National Museum of American History in the summer of 2018. He currently serves on the Board of Directors for Folk Alliance International, Music Maker Relief Foundation and is a Governor on the Board of Directors for the Washington, D.C Chapter of the Recording Academy.

In 2005, Flemons co-founded the Carolina Chocolate Drops who won a GRAMMY for “Best Traditional Folk Album” in 2010 and were nominated for “Best Folk Album” in 2012. He left the group to pursue his solo career in 2014. In 2016 the Carolina Chocolate Drops were inducted into the North Carolina Music Hall of Fame and are featured in the Smithsonian National Museum of African American History and Culture.​