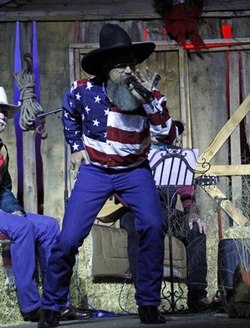 Tony began recitin' Cowboy Poetry in grade school in 1965 at age 5. His unique interpretation of the Cowboy way continues today. Tony refers to his style of recitin' Cowboy Poetry as; "Tuned Up & Twisted!" Notable poems Tony has recited are; "The Devil's Tail," by Gail Gardner. Tony learned at the age of 5."The Shootin' of Dan McGrew" and "The Cremation of Sam McGee," by Robert W. Service learned at the age of 11. He admiringly acknowledges the writers of the poems he recites out of respect, and says, "I like the idea of continuing the poet's stories so others can enjoy them, too." He is very enthusiastic about what he does. Those who've seen Tony reciting Cowboy Poetry say it's obvious he truly enjoys sharin' his enthusiasm with the audience, includin' the common statement," he's quite animated."
Tony's Cowboy Poetry line up includes; humor, classic, rodeo, patriotic, gunfighters and drifters, novelty, gold rush, serious verse and much more. He performs as a Cowboy Poet, humorist, story teller and entertainer. In addition, he does Civil War recitations such as the; "Gettysburg Address" and others includin' the most famous letter from the Civil War.
Tony Argento considers himself an ambassador of "Cowboy Poetry." It's been around since the years followin' the Civil War. It's unique form continues to show the Cowboy and the American West is alive with stories and tales of elevated humor, patriotism and serious or sad verse. It's a great source of entertainment for the entire family. Tony says, "Once you get a transfusion of "Cowboy Poetry" in your blood, you'll be hooked for life. That's what happened to me, and yes, it's very contagious."
Tony's Grandpa was a WWI Calvary scout. In July 1919, he entered the Salinas, CA Rodeo and was the first to ride a Black Angus bull, takin' 1st place and $500. In most cases he used an alias name, as his parents didn't want him ridin' rodeo for fear of him gettin' hurt. He competed at Madison Square Garden durin' the 1920's. The first rodeo organized there was in 1922. Later in life he was a Hollywood stunt rider and horse trainer for the western movie industry and good friend of Tom Mix. He was a cowboy for Miller & Lux, Inc., ( the largest private land owner and cattle operation in the U.S.)